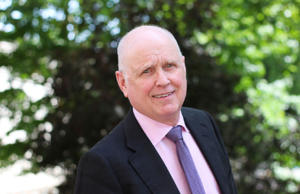 I grew up, as one of a family of 10 children, on a council estate near Dunstable. My father was a factory worker and an active trade unionist. My mother was fully occupied raising the family. I was the first in my family to go through further education (at Art School) and I began my full-time working life in 1974 in magazine publishing in London and became active in my trade, the National Union of Journalists (NUJ). Starting off as a local representative, I eventually became a member of that union's National Executive Council.

In 1981 I was appointed as a full-time officer of the NUJ and moved to the north of England. When publishers were no longer willing to negotiate with trade unions I began representing members in Industrial Tribunals (as they were then called) and sometimes in the County Court. Believing that the need for this kind of representation would increase, I thought I should be better prepared and began to study law part-time at Manchester Metropolitan University in 1990. The more I studied law the more I liked it so I decided to try for a career at the Bar, following in the footsteps of a colleague of mine in the NUJ who had made that transition two years before.

I undertook the Bar Vocational Course at the Inns of Court School of Law (ICSL) between 1996-97. I could not have done this without the financial and moral support of my partner who not only took responsibility for our household expenses but shouldered the burden of looking after my two young children while I was studying.

Like many other mature aspirants at ICSL at the time, I found it very difficult even to get pupillage interviews. There appeared to be a reluctance to take on those who had had previous careers. I learned later that this was, in part, due to the fear of newly qualified barristers that people like me would take work away from them at the time they were struggling to build their own practice.

Fortunately, having already appeared as a trade union representative in the Employment Tribunal against John Bowers, he was kind enough to offer me a first six pupillage (his last as a supervisor before taking silk), which I gladly accepted. I undertook my second six at York Chambers and became a tenant there in 1998. In the following eleven years I built and lead a growing team specialising in employment and discrimination law, moving to Kings Chambers in 2000. I have been named as a leading practitioner in my field in Chambers and Partners and the Legal 500 for a number of years. I have now changed the focus of my practice to mediation, having qualified with CEDR in 2000.

I could not have done this without the financial and moral support of my partner who not only took responsibility for our household expenses but shouldered the burden of looking after my two young children while I was studying.

For the first few years of practice, and despite the speed at which it grew, I held a fear that I would be 'rumbled' and that I somehow did not deserve my place. Both at York and at Kings I have encourage and supported new entrants and have acted as mentor to other new entrants to the Bar. Whenever I have been invited I have spoken to groups of law students about my experience and, I hope, provided encouragement to those who might otherwise have thought they were not 'the right kind of person'.

The costs of becoming a barrister are now even higher, in relative terms, than they were for me but I believe there is more help available in the form of scholarships. It would be helpful if there was more encouragement to existing members of the Bar and chambers to give proper consideration to aspiring entrants from non-traditional backgrounds taking into account that they have often studied in difficult circumstances. An insistence by many sets of chambers on a 2.1 or a 1st degree will continue and may be more appropriate for someone who comes straight from university but those who have studied part-time while engaged in full-time and demanding employment (as I did) have skills and abilities which can be of equal value. That is undoubtedly the case with some of those for whom university was not an option immediately after school.