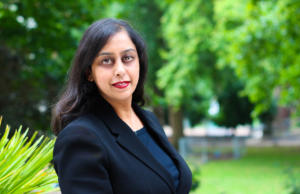 My parents are of Pakistani heritage and came to the UK in the 1960's, and neither had any formal education. I am the youngest of a sibling group of 6, and when I was just 14 months old, my father was paralysed from the neck down following a car accident.  My mother visited my father in a specialist unit most days (6 hours round trip) and we were cared for by family and friends.

My interest in the Bar peaked when I was around 14 years old. I was always quietly driven to better myself and seemed to have a skill in public speaking. If I am entirely frank, I am unclear as to how I made the leap to pursuing a career at the Bar, but I expect I was seduced by the courtroom dramas I watched on television and convinced myself that a lawyer's life would be equally glamorous and dramatic!

I went to a comprehensive school in a very poor working-class area. I was told in no uncertain terms not to set my ambitions too high - frankly it was considered an achievement to secure employment, whatever that might be.

My father died when I was 12. My mother had spent years caring for him and her children, and she was unable to provide advice and support about pursuing a career at the Bar.

To compound matters, I was from a very traditional background. None of the female members of my extended family had gone to University, and indeed it was frowned upon.  My mum refused to bow to such pressure, and recognising the significance of education, allowed two of my sisters and I to go away to university. This was probably the single biggest obstacle I faced at the time, which was only overcome by the support of my mum.

Financially, life was also a struggle. I worked part time from when I was 15, throughout further and higher educations. The cost of the Bar course was significant, many pupillages were unfunded, and I fully expected to incur significant debt if I was to pursue a career at the Bar: for somebody of my social background, this was particular daunting. My single biggest regret is that it didn't even occur to me to apply for a scholarship.

I received very little support along my journey. I did not have the benefit of contacts, and was particularly naive as to what was required to fulfil my ambition. I eventually applied for an overseas scholarship with Middle Temple and as a consequence, later learned what support the Inns could offer.

I remained steadfast in my resolve to secure pupillage primarily because I felt the need to prove that my mother had been right in supporting my decision to go to university.  I owe my determination to her. During pupillage I was also extremely fortunate to be assigned an excellent pupilmaster, and his support in particular was invaluable.

I am a family practitioner specialising predominantly in public law. I get a real sense of pride and value when I present a case well, particularly given the life changing decisions at stake.

Most of my work also involves clients with similar socio-economic backgrounds to my own, or who exhibit some other vulnerability (e.g. a learning disability, mental health problems or difficulties in their cognitive functioning) and competent, often forceful representation is necessary.  I have developed a reputation for robust cross examination, and whether ultimately successful or not, my sense of reward is ensuring that such individuals are properly represented.

I have previously been involved in mentoring schemes, and the Speakers for Schools Project. I have also been invited by an organisation called Lawlink to speak at one of their conferences; this organisation is dedicated to making the legal profession more accessible to those from non-traditional backgrounds.

I am regularly approached to deliver seminars and courses by a range of organisations.

I understand how difficult it is to succeed at the Bar, and I have been extremely fortunate to develop a busy practice. In my view it is essential that I invest time and energy in participating in outreach programmes, particularly for students hoping to pursue a career at the Bar.

In my view, there is a long way to go in terms of supporting or encouraging applicants from non-traditional backgrounds. When I first applied for pupillage, the number of non-white barristers on circuit numbered less than 10. During pupilllage, I was the only non-white member of Chambers. 18 years later, whilst there have clearly been some improvements, my own experience is that only a small number of applicants from such backgrounds attain an interview for pupillage. There has to be a fundamental shift in the mindset of the Bar to dispel what is possibly unconscious bias.  This can only be done by educating the Bar about equality and diversity and reinforcing that message regularly.

Many individuals, whilst quietly confident in their own abilities, remain anxious about the possibility of achieving success at the Bar. A positive role model from a similar background simply validates the possibility that a career at the Bar is not out of reach, providing one has the tenacity, intellectual ability and determination to succeed.

My advice to someone from a non-traditional background is simple: Believe in yourself, work hard and show your determination to succeed. If I, from my background, am able to succeed, you can too.