Guest blog: “Encouraged and focused” despite the Bar’s challenges 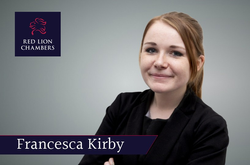 The Bar conference this year took part in both a virtual and in person form, mirroring what is now a common place practice within the legal profession. Sessions from Wednesday to Friday took place online, with the option of attending Saturday in person or online. The theme of the Bar Conference this year was recovery, growth and transformation. A very appropriate theme in light of the fact the Bar faces particularly challenging years ahead.

Initial speakers on Saturday, Derek Sweeting QC and Joanne Kane,  did not shy away from the difficulties. The backlog was highlighted, with figures of a 302% increase of cases older than a year in the Crown Court during the pandemic and that it was estimated the backlog will remain beyond 2024.  There can be no doubt that the swathe of cuts that began before the pandemic played a huge part in the current difficulties. The pandemic has only made what was already an increasing backlog, worse.

Beyond the backlog the Bar still struggles with diversity, which in turn impacts on public perception. The recently released Bar Council race report was highlighted throughout the conference and provides an undeniable conclusion that there is a race problem at the Bar that needs to be addressed.

Despite the difficulties, the conference was also eager to focus on the positives.  Members of the Bar were quick to rise to the challenges presented by the pandemic in relation to the training of pupils, and tailored mentor schemes have been created to ensure that pupils are not disadvantaged. It was also encouraging to hear that the young Bar itself is the most diverse and produces the most creative ideas for change. However, work needs to be done to improve retention rates of the junior Bar, and the publications of the delayed Criminal Legal Aid Review would provide greater clarity on whether the profession was sustainable.

It was therefore quite a jarring moment when a pre-recorded message was given by the Lord Chancellor, Dominic Raab, which was indicative of the government’s perspective on the Justice system: the backlog was accredited to the pandemic, and emphasis was placed on the money that the government has put into the system, in particular to digitise it. A nod was also given to the Police Crime and Sentencing Bill, a bill many parts of which  various practitioners and other stakeholders have labelled problematic.  It is disappointing the Lord Chancellor was not there in person to listen to the informative discussions taking place after his message. Discussions from individuals who are well acquainted with the realities of the justice system, and which were contrary to the picture of the system the government are trying to paint.

The first panel ‘The picture of justice for the next five years’, discussed both the pros and cons of our hybrid virtual and in-person system. The use of remote hearings and technology can increase access to justice and the speed of some processes such as simple administrative hearings. However, for some it can alienate them and make participation harder. A clear consensus was that the use of technology needs to be carefully evaluated and used only in appropriate cases. It is not the solution to the backlog.

The second panel ‘Improving diversity through fairer distribution of work’, began with a whistle-stop tour of figures highlighting the huge disparity between earnings of men and women at the bar. In crime, female advocates are proportionately less likely to feature in multi-defendant cases, high-value frauds or as leading juniors. Right at the bottom of the pile in terms of earnings are black women. Earnings correlate with who stays and who survives, and thus impacting on the future makeup of the bar. We must all play our part in implementing the 23 recommendations produced by the Bar Council’s Race Working Group.

The remaining panels of the day were again informative and entertaining. The ‘Masterclass: #LegalTwitter: Navigating social media at the Bar’ provided a fresh perspective on the good that social media can play. It can create connections that would otherwise be difficult to forge, it can showcase the best parts of the Bar, break down barriers and demystify the profession. It was also very interesting to hear about the perspective of legal reporters, in the panel ‘Making headlines: The role of journalism in shaping the justice system’ and what we can do to assist them in their vital role of ensuring justice is seen to be done.

The conference was a wholly worthwhile and reinvigorating experience. Spending the day with colleagues and friends, and listening to the interesting debates, I came away from the conference encouraged and focused. I believe this profession will do everything it can to meet the challenges posed, but also to advocate for change and transform the bar into the just, efficient and diverse place we all know it can be.

Francesca Kirby is a criminal barrister at Red Lion Chambers