What is the Bar Council doing to support barristers at a time of unprecedented challenges for the profession?

Find out below where your practising certificate fee and Bar Representation Fee go, how we have tailored our work and cut costs to reflect the times, what we're doing right now to Back the Bar and how you can help. 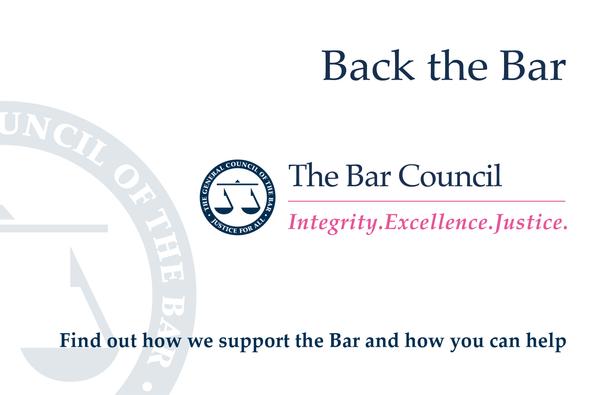 How to pay the BRF

Your annual payment of £150 can be paid by monthly direct debit or by credit card on MyBar, when you complete the Authorisation to Practice process or at any other time through the year.

How our work is funded

You may be aware that 71% of practising certificate fees go to the regulators (Bar Standards Board, Legal Services Board and Legal Ombudsman), and the proportion that helps fund the Bar Council covers only 62% of the income we need to effectively support the Bar. The remaining funds are generated by our services, training and events portfolios, generous contributions from the Inns of Court and, most importantly, the Bar Representation Fee (BRF).

How we are managing our expenditure

In 2020/21 we took several cost-saving measures that enabled us to support the profession by keeping the practising fee bands and levels the same. These measures included:

This year, the Bar Standards Board has announced that it will be making significant increases to its budget to recruit an additional 14.4 members of staff, at a cost of £1.1m (22%). This change will have an immediate impact on the profession, members of which will witness several changes to the practising fee bands and levels, including a 5.25% demographic increase combined with a 4.5% fee increase. In contrast, whilst the Bar Council’s costs are also expected to rise by £362k, they account for just 15% of the total increase to The General Council of the Bar’s budget and are partially offset by a rise of £45k in commercial income.

In November 2020, our Chief Executive wrote to the Director General of the Bar Standards Board to test the reasonableness of his business case for ‘Strengthening the Bar Standards Board’ and explain why the linked strategy consultation had not aligned with the budget setting timeframe. View the full copy of his letter.

What has the Bar Council done for you lately?

In addition to our usual programmes of work, in 2021/22 we have continued to tailor our efforts to ensure we make the most effective impact possible in supporting the Bar through the Covid-19 crisis, the Criminal and Civil Legal Aid Reviews, and other challenges. Here are some examples:

Covid-19 and the courts

Throughout 2021/22 the work of our Covid-19 Working Group continued, with the website being frequently updated in response to every new announcement by the Government and our Ethical Enquiries Team handling a surge of phone calls and emails relating to issues arising because of the pandemic.

We continued to advocate for a more efficient use of the court estate and successfully made the case against Extended Operating Hours. Our Legal Services Committee has also engaged with HMCTS on its court recovery plans, including on issues concerning the digitisation of services and access to justice, delegated judicial functions, and the pausing of the Common Platform rollout.

Developed an evidence-based consultation response for the Criminal Legal Aid Review, matching the legal aid fee payment data of the Ministry of Justice, Legal Aid Agency, and Crown Prosecution Service with the Bar Council’s own data on barristers, demonstrating on the detrimental effect of underfunding in legal aid on the sustainability of the profession. Sir Christopher’s subsequent report, published in December 2021, recommended a raft of increases in funding and the Bar Council worked quickly to roll-out a virtual briefing for the profession, which was held on 20 December in conjunction with the Criminal Bar Association.

In December 2020, the Bar Council’s Remuneration Committee intervened in the Court of Appeal case LewLawLtd v Zuberi, which related to the construction, interpretation, and enforceability of Damages Based Agreements. The judgment was handed down on 15 January and, having adopted a narrow interpretation of the meaning of “Damages Based Agreement”, it is now the case that hybrid fee arrangements do not fall foul of the 2013 Regulations. The ramifications of this decision are far-reaching and should be welcomed by the profession. In continuance of its work in this area the Bar Council will be responding to a government consultation on Damages Based Agreements, which it is expected to release later this year.

In 2021/22, the Bar Council worked with nearly 50 cross-party members and hosted nine roundtables with Government Ministers, the Opposition and Parliamentarians (including MPs and Peers) to discuss issues including the regional courts backlog, human rights, regulation, and legal services abroad. We submitted 14 pieces of written and oral evidence to a range of Select Committee inquiries, including the Lords Justice and Home Affairs, and Police, Crime, Sentencing and Courts Bill Public Bill Committees, and were referred to in Parliament on 59 separate occasions.

The Race Working Group produced a ground-breaking Race Report, evidencing the systemic obstacles for barristers from ethnic minority backgrounds to building a sustainable career at the Bar. The Report was launched at the Bar Council’s two-part Race Summit 2021.

The Working Group continues to proactively encourage the profession-wide implementation of actions plans that seek to tackle race inequality at the Bar. It has further supported the Report’s recommendations through the introduction of Race Awareness Training, which the Bar Council has delivered to over 20 sets in the past four months alone, and by supporting the 10KBI initiative and coordinating the inclusion of the profession, the pilot scheme for which received 583 applications for internships at the Bar.

Utilised the results of our Barristers’ Working Lives Survey 2021, which allowed us a deep insight into the working lives of barristers, to develop evidence-based policies on issues like bullying, access to work, and legal aid. This research formed a strong element of our landmark Life at the Young Bar report.

The Life at the Young Bar report has helped to formulate our Young Bar policy going forward. It highlighted the impact of the coronavirus pandemic on the Young Bar, issues around wellbeing and the sustainability of the profession, and demonstrated that discrimination against women and under-represented groups within seven years post-pupillage appears to be deep-rooted. Over the coming year, the Young Barristers’ Committee will be using the report findings to build and implement a renewed long-term strategy for improving the working lives of young barristers, with a particular emphasis on culture, working practices, and sustainability.

Read the Life at the Young Bar Report

The Regulatory Review Working Group responded to five regulatory consultations and successfully advocated against the Legal Ombudsman’s proposed budgetary increase of 19%, thereby ensuring that it did not, in and of itself, affect the practising certificate fee levels and bands.

More recently, the Working Group has started its work on the issue of deferral of Call and the scope of the Bar Standards Board’s regulation, both of which have clear budgetary impacts and costs to practising members of the Bar.

Following several ransomware attacks on chambers in the Summer of 2021, the Bar Council began working with the Law Society on a portfolio of information and cybersecurity materials for the profession. The two organisations will be launching a standard 24-question compliance questionnaire for barristers’ chambers at this year’s Risk and Compliance Annual Conference. The document will enable chambers to demonstrate their cybersecurity credentials to instructing firms and reassure prospective clients of their ability to handle even the most sensitive matters as effectively as possible.

To compliment this work, the Bar Council announced the introduction of a new cybersecurity business partner, Mitigo Cybersecurity, in January 2022 and negotiated, on behalf of the profession, a 10% discount on their services.

Offers and discounts from our business partners

In February 2021 the Bar Council launched the Sustainability Network, through which it provides 44 member sets with a range of services designed to help them transition to a more sustainable way of working, saving not just carbon emissions but costs.

To build upon the achievements of the Network we have recently established a Climate Crisis Working Group, whose aim in 2022 will be to better understand the wider role that the Bar Council should play in ensuring that barristers have the support they need to respond to the crisis, including providing climate expertise to wider policy areas within the organisation.

Find out more about the Sustainability Network

Our thanks to the profession

We recognise that many members are still recovering from the financial hardships that they endured during the pandemic and are suffering because of the continued, chronic, underfunding of the justice system in England and Wales. However, for those who can afford to make a voluntary Bar Representation Fee (BRF) contribution of at least £12.50 a month during the authorisation to practise process, we would like to take this opportunity to express our gratitude.

Many of these initiatives would not be possible without funding from the BRF.

As well as supporting new initiatives and our long-standing work funded by voluntary contributions, subscribing to the BRF also gives you a range of benefits to take advantage of during the year.

Please help us to Back the Bar by paying the BRF when you renew your practising certificate, or log into MyBar to subscribe to the BRF now.

How to pay the BRF

Your annual payment of £150 can be paid by monthly direct debit or by credit card on MyBar, when you complete the Authorisation to Practice process or at any other time through the year.