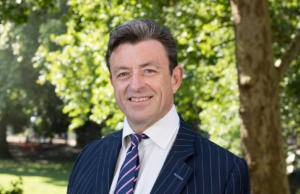 I am now 52 years old and was called to the Bar in 1997 when I was 30.  I was the first of my family to go to university. My father was an engineer and my mother worked doing part-time driving for social services. Family life was dominated by the fact that my older brother was severely mentally handicapped. That meant that I had a constant role in looking after him; he could not leave the house without one of us with him and he could never be left in the house alone; I do not want to over dramatize this but being a carer can mean that you lose focus on your own future.

My family moved down from Scotland to Kent when I was young and I missed a year of primary education; the local primary school agreed for me to be in what would now be Year 6 for two years as there was no place for me in Year 5. Perhaps unsurprisingly I then failed my 11+. For those that fail it often means feeling like your options are limited and you are simply not bright enough to do well. That is how I felt.

I was sent to a Secondary Modern in 1979; it did not even have a 6th Form. I left school at 16. The school has now been closed. I did manage, however, to get into a 6th form college to study O-Levels - my best subject was Law. But that was the end of my academic career (at that point) and I went to work in the docks at Ramsgate where I was involved in clerical work - I recall my parents being happy that I had an 'indoors job'.

When I was 20 I left the UK and went travelling overseas. I managed to be away for some time. It was only then that I started to think 'bigger', having met students - a breed of people who I thought came from a different planet until I met them.  Encouraged, I went back to work at the docks on my return to the UK but this time did A-Levels by correspondence course during my night shifts. I got into University in the mid-1990s and I chose Law just because I had been good it at 6th form. I was attracted to the Bar because I loved the idea of working in court rather than an office; it was as simple as that.

The biggest problem I had at university and Bar School was money. I worked every hour I could get. My father in his retirement was a taxi driver and in the vacations, I did night work in his cab. I recall at the beginning of my Bar course applying for a bursary from my Inn. At the interview I was told that the bursary was only awarded to those who were thought to likely to succeed at the Bar. I did not get the bursary and it seemed clear that it was because my credentials were not what was expected; the award was not to do with need or promise but about giving money to a candidate whose CV looked traditionally impressive.

Pupillage itself was an encouraging experience but only because no one in chambers had any idea of my background. Also, as I was a little older the clerks used me when the solicitors said they wanted an experienced junior! Thus, one peculiarity about my background was beginning to become an advantage. I was one out of the two pupils taken on as tenants out of 4 of us.

There was precious little in the way of support or encouragement along my journey - but the very things that hold you back along the way suddenly become an advantage in the real life of pupillage where life experience counts.

Without hesitation it is being self-employed. A lot of my colleagues have no idea what being employed is like and little inkling about the privilege of working in the professions. Life at the Bar has met my expectations. I strongly suspect that I enjoy the status of being a barrister, and thus take more joy from it, than some of my colleagues who always expected to find themselves in a professional position.

My daughters did pass the 11+ and their local grammar school enters the National Mock Magistrates' competition. I have been helping out with that for a few years - my role is to help the pupils with the basics of addressing a Bench, listen their cross-examination and make comments. I take some pride in being able to encourage and assist youngsters, many of whom are also not from traditional Bar backgrounds. For all of us who have done well at the Bar I think it is important to try and give back.  Encouraging youngsters who love the idea of the Bar but think it cannot possibly be for 'the likes of them' is crucial, especially in the present climate of legal aid cuts.

I am involved in interviewing potential pupils. As such, I have undertaken the Bar Council's course designed to deal with things like unconscious bias. That is the way forward. The criminal Bar is less guilty of unconscious class bias than other areas of the Bar. I fear it will take years to create a level playing field but there are things that can be done - e.g. ensure all chambers use a universal application process for pupillage, encourage state schools to engage with the professions and local courts and perhaps, set up something along the lines of the Mock Magistrates Competition.

Not to be put off by the horror stories about failure rates. If the student has got as far as Bar School then he/she has got something more to offer than most well-heeled, well-travelled candidates with a welter of internships on their CVs. They have real life experience which, as I learned in pupillage, gave me just the slight edge that you need to secure tenancy.