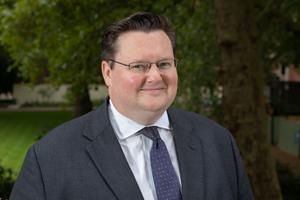 I grew up in London suburbia and went to a comprehensive school, having failed the exam to get into the local selective school. I wanted to be a lawyer when I was at school but did not know any lawyers and assumed that they were all far cleverer than me. I decided to do a surveying degree instead and went to Loughborough, a plate glass university. I was the first generation in my family to go to university. My degree course included some law, which confirmed that law was what I was really interested in. After graduating and working for a few years in construction, I did a part-time Master’s degree in construction law at King’s College London which led to me deciding to try to become a barrister. So I studied the law conversion course at Nottingham Trent University and then the Bar course at City University, both part-time while working.

There were obstacles in terms of finances and not knowing much about the Bar. I was able to deal with the cost of training as a barrister by studying part-time whilst working, which made it affordable. The six years I spent working and studying part-time gave me time to understand and become familiar with the legal professions, including the Bar. The Inns of Court appear very traditional and this can be overwhelming at first if you’ve not been to a public school or an Oxbridge college. Being in London meant that I could go to lectures and events easily and get to meet people. This helped both in understanding what the Bar was really like and in making me more comfortable in trying to get to the Bar.

Studying with barristers during my Master’s degree reassured me the path I was on. Getting to know them, and the help and encouragement they gave me, was invaluable. I was also lucky to have a barrister as my Master’s dissertation supervisor, who gave me very good advice and also, by coincidence, was later my mentor through my Inn’s mentoring scheme. Receiving advice from people who had been through pupillage and knew how the Bar worked was I think what made the difference for me.

Life at the Bar has proved to be all that I hoped it would be. I ended up practising in public and environmental law, a field unrelated to my previous experience and Master’s degree, but have thoroughly enjoyed it. The challenge and responsibility that comes with the role and being self-employed gives you a freedom in working life that really does not exist in any other profession.

How do you use your experience of coming to the Bar from a under-represented background to support those seeking to do the same, and/or why is it important for barristers to contribute in this way?

I have been mentoring Bar students for about nine years, through a number of schemes and have also given mock interviews, as well as participating in school programmes. I also volunteer at a university law clinic and have helped a number of students from various paths, with informal shadowing and the like. Students from under-represented backgrounds usually don’t have the connections to get the important first few steps towards the Bar, so we need to make an effort to help them achieve that.

The single key issue is the Bar not being very accessible. Often people aren’t aware of this issue when considering a career at the Bar, or if they are aware, they think it is beyond them. They might also lack contacts to get a foot in the door or lack the confidence to push themselves forward and make the most of themselves. There is more that the profession can be doing, including barristers visiting schools to promote the Bar, to help students think about the Bar as a career from an early age.  It also includes bringing school and university students into the Bar – chambers, Inns, bar schools, etc – allowing them to meet barristers and Bar students, to understand how it works, make contacts, and gain confidence. It is crucial to provide support and mentoring throughout the journey, from sixth form through to the completion of the pupillage. There is also a need for financial support for those from the most deprived backgrounds who could not otherwise afford the course fees, and to make routes to the Bar more open e.g. through part-time education whilst people are working. At the moment, the taught part of the new Inns of Court College of Advocacy Bar course is only available full-time, which shuts out people who have to work to afford to live or who have caring responsibilities.

What advice would you give to someone from an under-represented background, seeking to succeed at the Bar?

The truth is that, if you have the ability, and can gain the necessary confidence, there is no reason that you should not make it at the Bar regardless of your background. You will need something to help you stand out from the sea of pupillage applicants with Oxbridge law degrees. My advice is actually not to do a law degree. Get a good degree from a good university in an interesting subject and try to bring something to your application form that will make you stand out, such as public service or an outside interest, like politics, performing arts, writing or sport.